The Hunsdon, Eastwick and Gilston Neighbourhood Plan Group (NPG) has issued its response to the revised planning application for Village 7 (3/19/2124/OUT) submitted by City & Provincial Properties (as Briggens Estate 1)

The NPG has objected to the revised application, stating:

The revised planning application for Village 7 in the Gilston Area continues to give serious cause for concern and without major amendment is not fit for determination; at the very least it requires further comprehensive alignment with Villages 1-6, commitment to infrastructure delivery and design modifications.

The application still departs from policy objectives and the vision for the Gilston
Area in too many aspects to be considered fit for determination. It is not presented in a form which should be approved by the Council without further very
substantial amendments.

In fact, it will remain fundamentally flawed if it is pursued as a standalone development or one which expects to be built before the other villages of the Gilston development are constructed in a logical, sensibly planned sequence.

You can read the response in full here.

Hot on the heels of Places for People’s revised applications is the updated Outline Planning Application from Briggens Estate 1 for 1,500 new homes (aka “Village 7”) in Hunsdon.

The final deadline for you to respond to the revised planning application is just days away on Thursday, March 18th 2021.

Your Neighbourhood Plan Group expressed its overall objection to the original version of the application in January 2020 and despite some revisions, we feel the application still falls far short of what is acceptable.

We encourage you to make your own response to the consultation using the following link:

Remember to fill in all the necessary fields, including the tick-box for whether you Object, Support or are Neutral towards the planning application, as below: 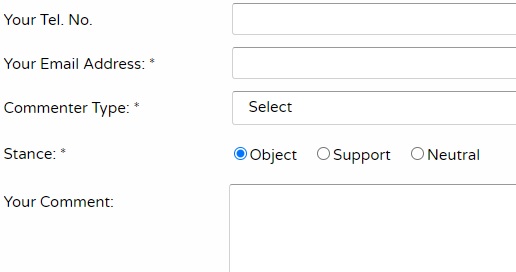 We suggest that a possible reply by you might include some or all of the following points:

“Unfortunately, despite the revisions made following the previous consultation period, the revised planning application for Village 7 has not fully addressed the concerns raised by the community with regards to:

– Village 7 being promoted as a standalone development independent of Villages 1-6. This means a lack of co-ordination needed for the adequate and timely provision of necessary infrastructure across the Gilston Area. It is being rushed through when it should be part of a properly phased and sensibly planned part of the whole Gilston Area

– the lack of commitment to infrastructure delivery. Sustainable travel, public transport, schools and community facilities have been shunted off to section 106 negotiations, which will be behind closed doors. Existing schools and services are at risk of being overwhelmed

– the unclear provision for stewardship and transfer of assets to the community or a any long-term funding plan for these assets. Another key matter deferred to s106 negotiations that should actually be agreed with the community before the application is approved

– the vague and uncertain connectivity of Village 7. There is no clarity of when Village 7 will be connected to the rest of the development. It may be in 10 or 20 years time or never! The cycle route and footpath plans are not under the control of the applicants and the plans for them are potentially undeliverable

For Village 7 to have any hope of delivering 60% sustainable transport it needs the Village 1-6 infrastructure in place, which won’t happen until the other side of 2030. This will mean rat runs on roads like Church Lane that weren’t built to take this traffic. The application is missing proposals to assess these major impacts on existing residents and how to mitigate them

– the newly-proposed Football Hub threatens the function of green spaces – what was previously a plan for a few grass football pitches is now artificial pitches, pavilions, dugouts, a massive car park, clubhouse and floodlights, resulting in air, light and noise pollution. There’ll be a severe impact on local wildlife

– the newly-proposed provision of land for Gypsies and Travellers in the buffer between Villages 7 and 6 goes against the original Gilston planning concepts and the emerging Gilston Area Neighbourhood Plan. The buffers are supposed to be undeveloped spaces and all housing provision should be in the stated developable village boundaries

The proposals for Village 7 seem to have lost sight of the original concept for a development of outstanding quality and are failing to meet promises made in the District Plan or to stick to Garden City Principles.

There’s a great danger that Village 7 will end up another as suburban housing estate plonked in the countryside without the facilities needed to support it and will lead to social problems with disaffected residents  and anti-social behaviour rather than the inclusive and balanced communities.

I therefore maintain my OBJECTION. The application should be withdrawn and these major shortcomings addressed.”

We’d like to thank you for your support and continued engagement with the large number of consultations and applications. It’s appreciated by the whole community.

You can now download and read the full Examiner’s Report. The QC’s one page summary is reproduced below.

I was appointed by East Herts District Council (the Council) to carry out the independent examination of the Gilston Area Neighbourhood Plan 2020-2033.

The examination was carried out between October 2020 and February 2021. It was undertaken by considering all documents submitted to me, including Regulation 16 Representations. I held a hearing on 19 November 2020. I undertook a site view on 11 January 2021.

I find the NP is based on extensive community engagement, well researched supporting evidence, and subject to matters set out in the Report provides an appropriate set of local policies.

I issued Examiner’s Note 2 on 26 October 2020, stating three serious concerns I then
had as to compliance with Basic Condition (a). The third concern fell away, but concerns 1 and 2 remained.

Following the hearing, the Neighbourhood Plan Group (NPG) submitted a revised NP, Much of the revised material had been subject to full discussion at the hearing. The December 2020 Edits document was given full publicity, and representations were submitted. This document overcame my first and second concerns, and effected other significant improvements.

Subject to Recommended Modifications in the Report, including the substitution of the December 2020 Edits for the submitted NP, I conclude that the NP meets the Basic Conditions and other statutory requirements, and I recommend that it proceed to referendum.

I further recommend that the referendum area should be extended to include the whole of the Parish of Hunsdon.

The full examination – including all formal correspondence – remains available on our dedicated Independent Examination page and also at the East Herts Council website.

Briggens Estate has submitted its revised planning application for Village 7.

This application from City & Provincial Properties seeks to secure the basic agreements for Village 7, to be built on land off Church Lane and the A414 in Hunsdon and Eastwick, Hertfordshire and comprises up to 1,500 residential homes and facilities.

The closing date for comments is Sunday, February 28.

Briggens Estate will hold two Zoom Q&A sessions on the revised planning applications: on Wednesday, February 10 at 6pm-8.30pm and Saturday, February 13 at 10am-12.30pm.

If you would like to attend please can you register your interest by emailing gilston.applications@eastherts.gov.uk at least 24 hours in advance

Hunsdon Eastwick and Gilston Neighbourhood Plan Group has responded to the revised planning applications from Places for People.

After consultation with the community and the Parish Councils of Hunsdon and Eastwick & Gilston, the Hunsdon, Eastwick and Gilston Neighbourhood Plan Group (HEGNPG) has concluded that the proposals included in the revised planning application submissions for the Gilston Area cannot be supported and should not be approved without further integrations and modifications.

These are necessary to demonstrate a clear commitment to the delivery of development in the form of distinct villages, enhancing the natural environment and supporting infrastructure that addresses the needs of future and existing communities, as required by Policy GA1, the submission Gilston Area Neighbourhood Plan, the Gilston Area Charter SPD and other relevant guidance including the Gilston Area Concept Framework and the HGGT Vision and Design Guide.

In addition, the mitigation of impacts on the existing communities is not adequately addressed. Far too many of these measures are left vague and unspecific to be defined and secured through the s106 agreement and governance arrangements. We maintain that greater clarity and certainty on these critical matters is required before the current planning applications can, properly, be determined.

We acknowledge that the applicants have made some welcome additions and clarifications, while retaining strong commitment to quality building design and 40% affordable housing. Other welcome improvements are on public transport provision, heritage protection and increase of employment space within the village centres.

However, we remain concerned that if East Herts Council approves the applications in their current form, they will fail to achieve the agreed vision and objectives for development in the Gilston Area and fail to fulfil the Garden City principles set out in the District Plan itself.

You can read the full response here

We use cookies on our website to give you the most relevant experience by remembering your preferences and repeat visits. By clicking “Accept All”, you consent to the use of ALL the cookies. However, you may visit "Cookie Settings" to provide a controlled consent.
Cookie SettingsAccept All
Manage consent

This website uses cookies to improve your experience while you navigate through the website. Out of these, the cookies that are categorized as necessary are stored on your browser as they are essential for the working of basic functionalities of the website. We also use third-party cookies that help us analyze and understand how you use this website. These cookies will be stored in your browser only with your consent. You also have the option to opt-out of these cookies. But opting out of some of these cookies may affect your browsing experience.
Necessary Always Enabled
Necessary cookies are absolutely essential for the website to function properly. This category only includes cookies that ensures basic functionalities and security features of the website. These cookies do not store any personal information.
Non-necessary
Any cookies that may not be particularly necessary for the website to function and is used specifically to collect user personal data via analytics, ads, other embedded contents are termed as non-necessary cookies. It is mandatory to procure user consent prior to running these cookies on your website.
SAVE & ACCEPT